Margaret’s sister Rosamond, the second child, was born on February 6, 1878, at 3 Otis Place, Boston (Birth Certificate), and died at Newburyport, MA on August 11, 1971 (Social Security 020-40-3710). In an article about her father at his death in 1909, she is described as one who “plays brilliantly and is a favorite member of the Vincent Club.” (Transcript, April 5, 1909) This EXACT same wording had been used by the Boston Globe in an article two years earlier which was about Lang’s 70th. birthday. (Globe Archive (December 22, 1907) The Globe article printed the day after his death mentioned that Rosamond “is a member of the Vincent Club and composed the music for their recent show.” (Globe (April 5, 1909)

Rosamond composed the music for the 1906 Vincent Show, The Merry Marquis. The words were by Georgette Parks, the orchestration was by Mr. Kanrich, and the score was published by C. W. Thompson-“Ushers will take orders for [the] music.” (Program, 15) The Music Library at Eastman School of Music has this score available for as a download. There were eight separate musical numbers in the score. The orchestra consisted of four First Violins, three Second Violins, two Violas, one Bass, two Flutes, two Clarinets, two Horns, two Cornets, one Trombone, one percussion and piano; Rosamond and Elizabeth S. Porter were the Leaders. A footnote said that the orchestra was “assisted by members of the Bostonia Orchestra.” (Program,  21) Rosamond Dixey, daughter of B. J.’s longtime pupil, Richard C. Dixey, was the Property Manager. 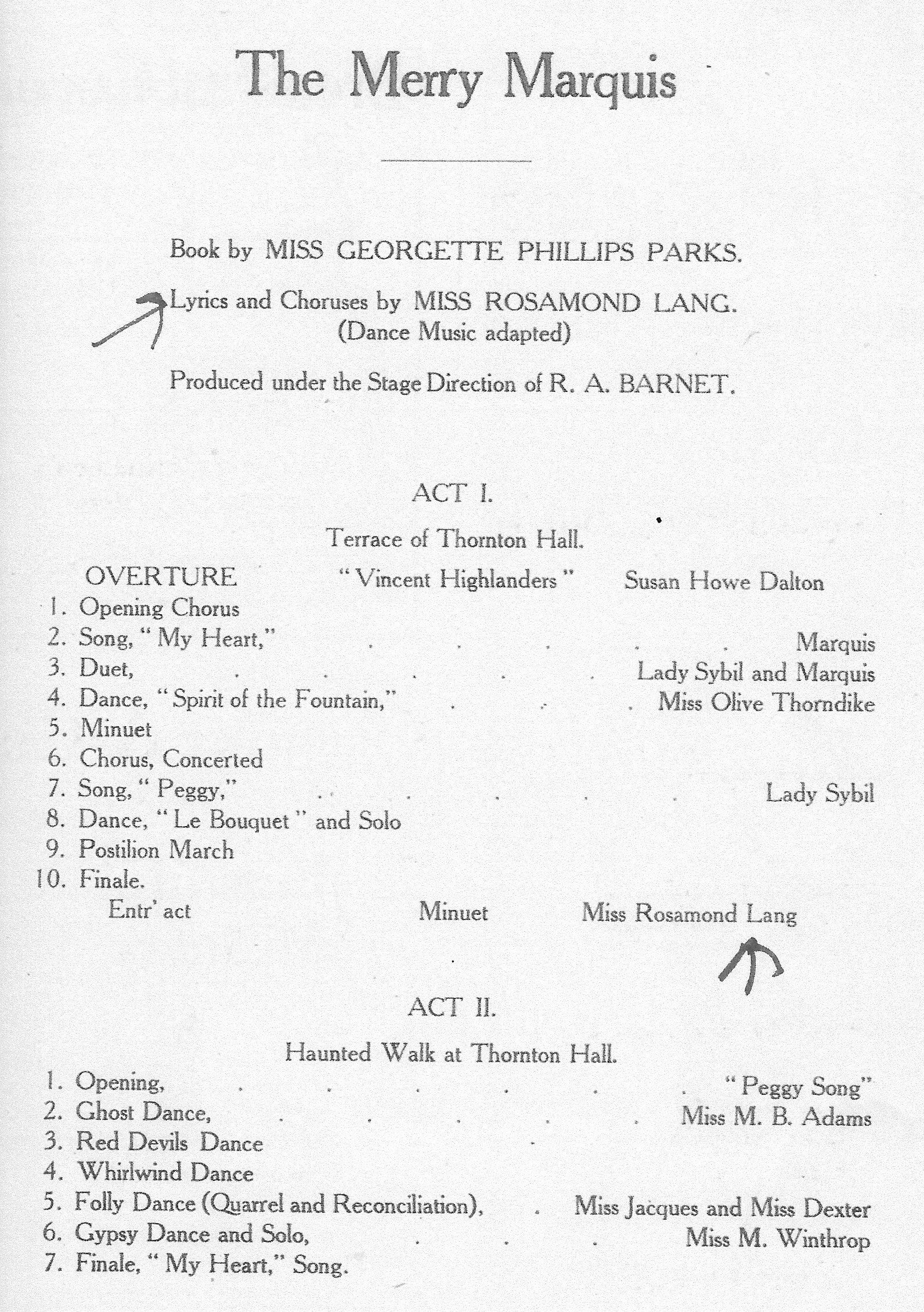 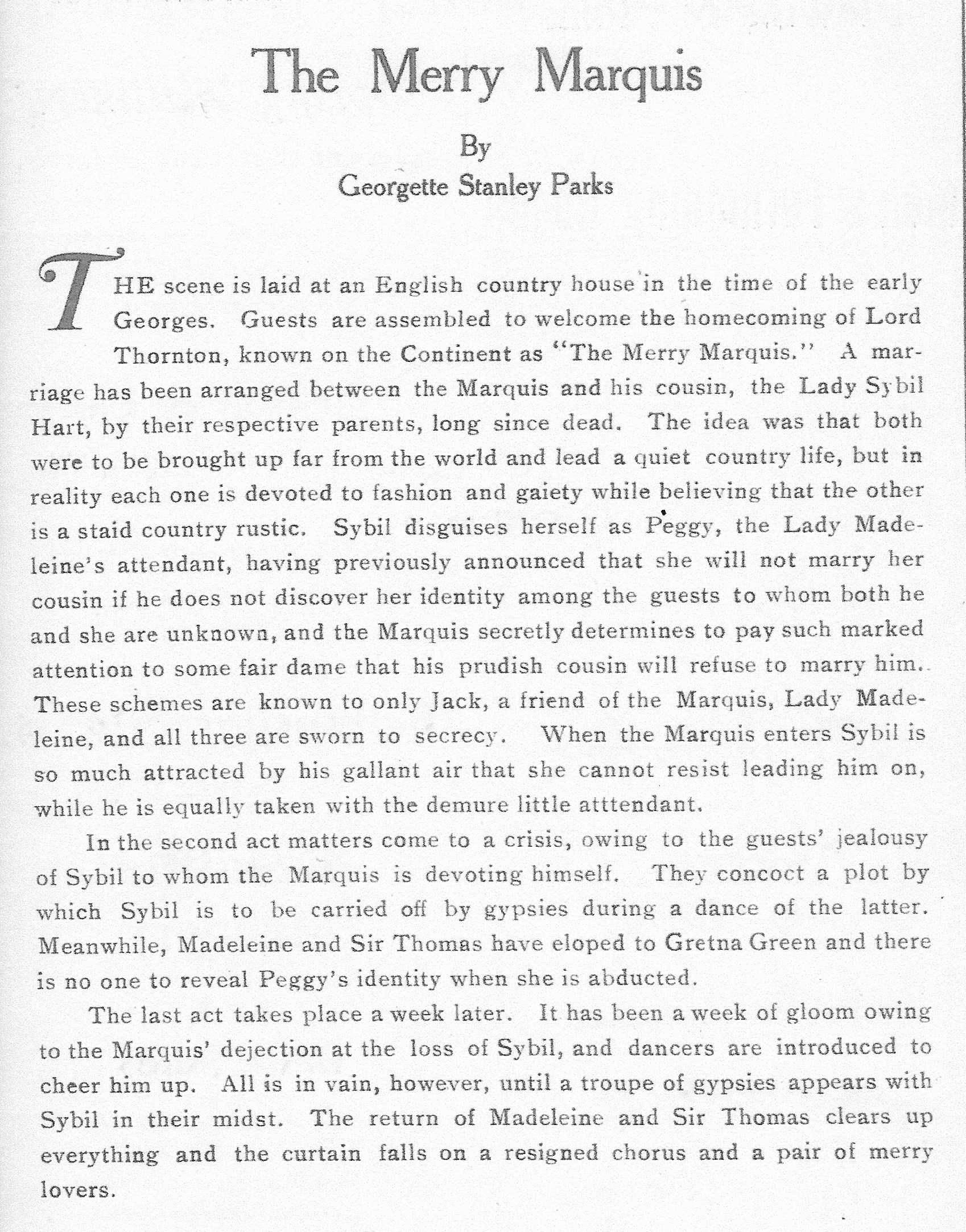 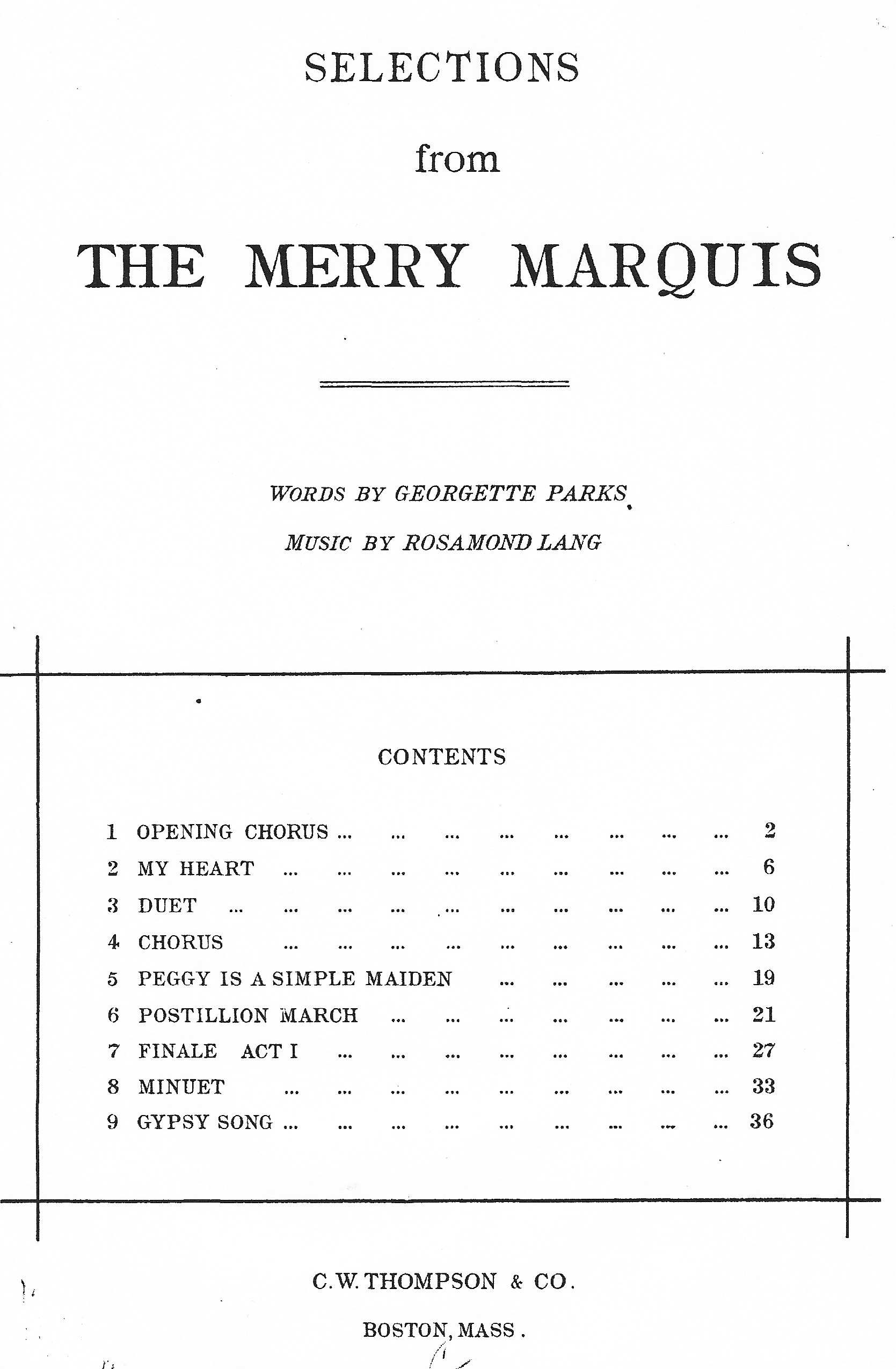 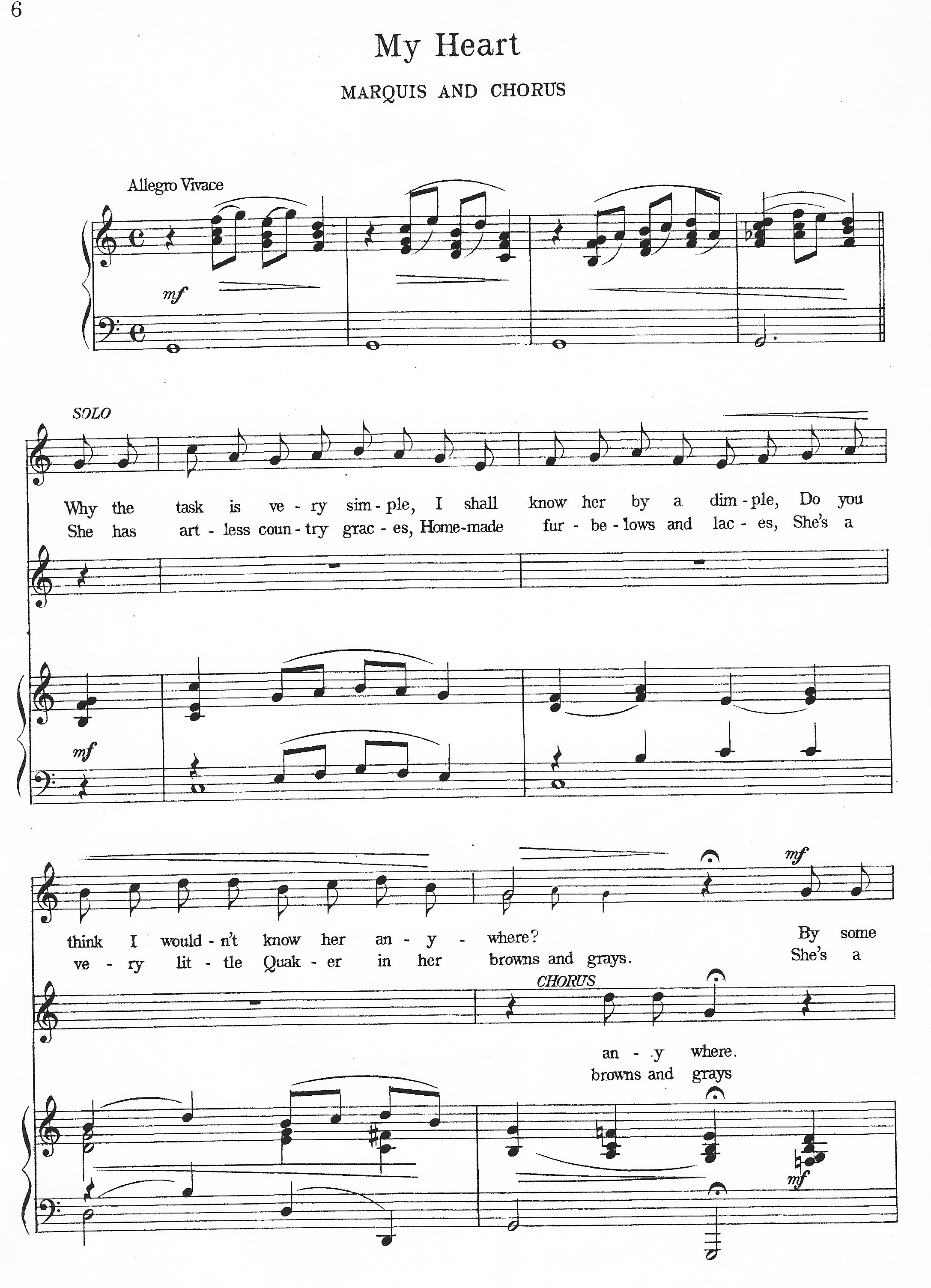 Below- The patter song becomes a ballad as shown below. In the Second Act, the Marquis sings the same music but with the words “is, is you” instead of “not you, not you” as sung in the First Act. 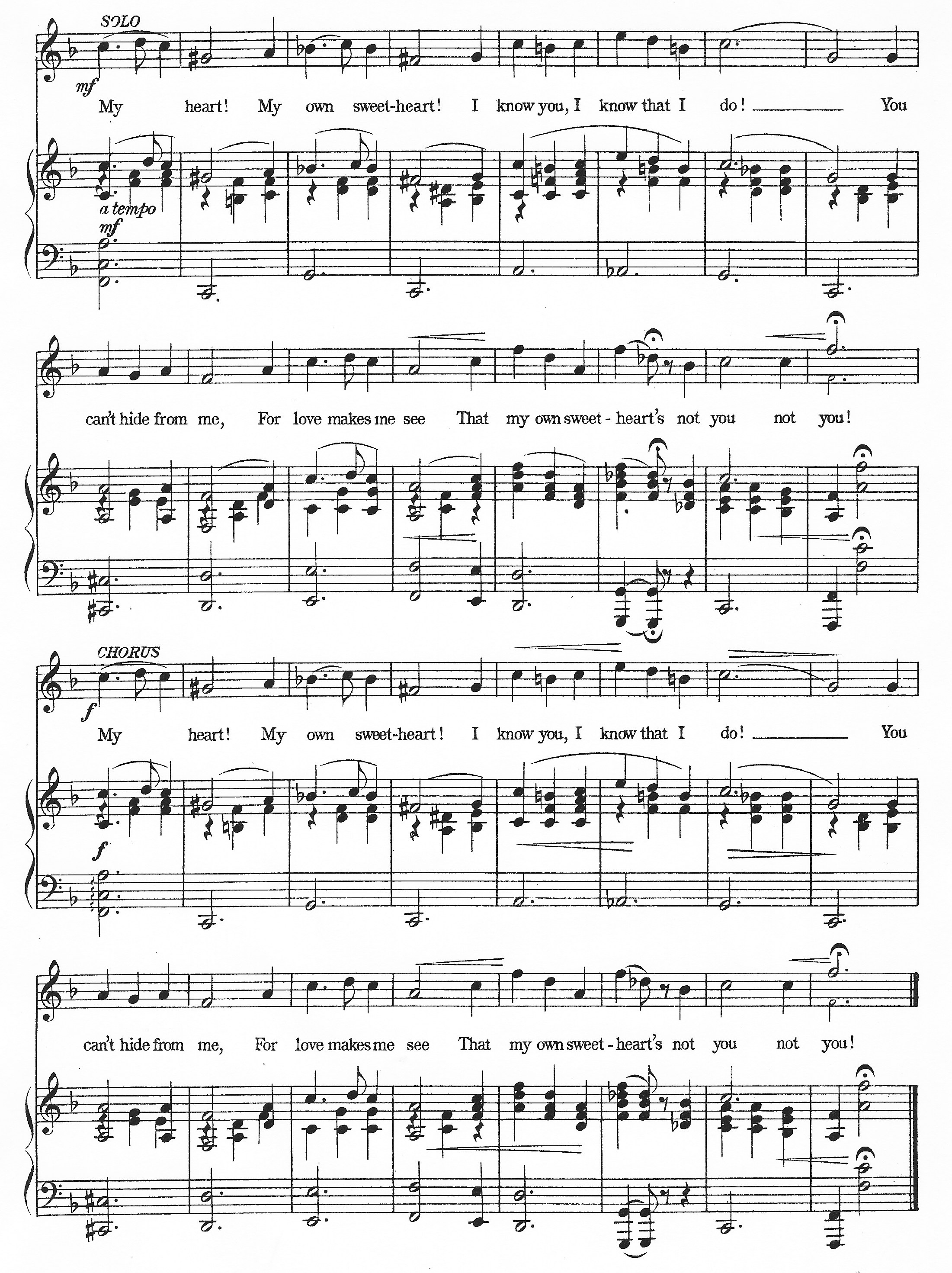 Below-Sybil sings of “simple Peggy” in a simple folk-like melody. 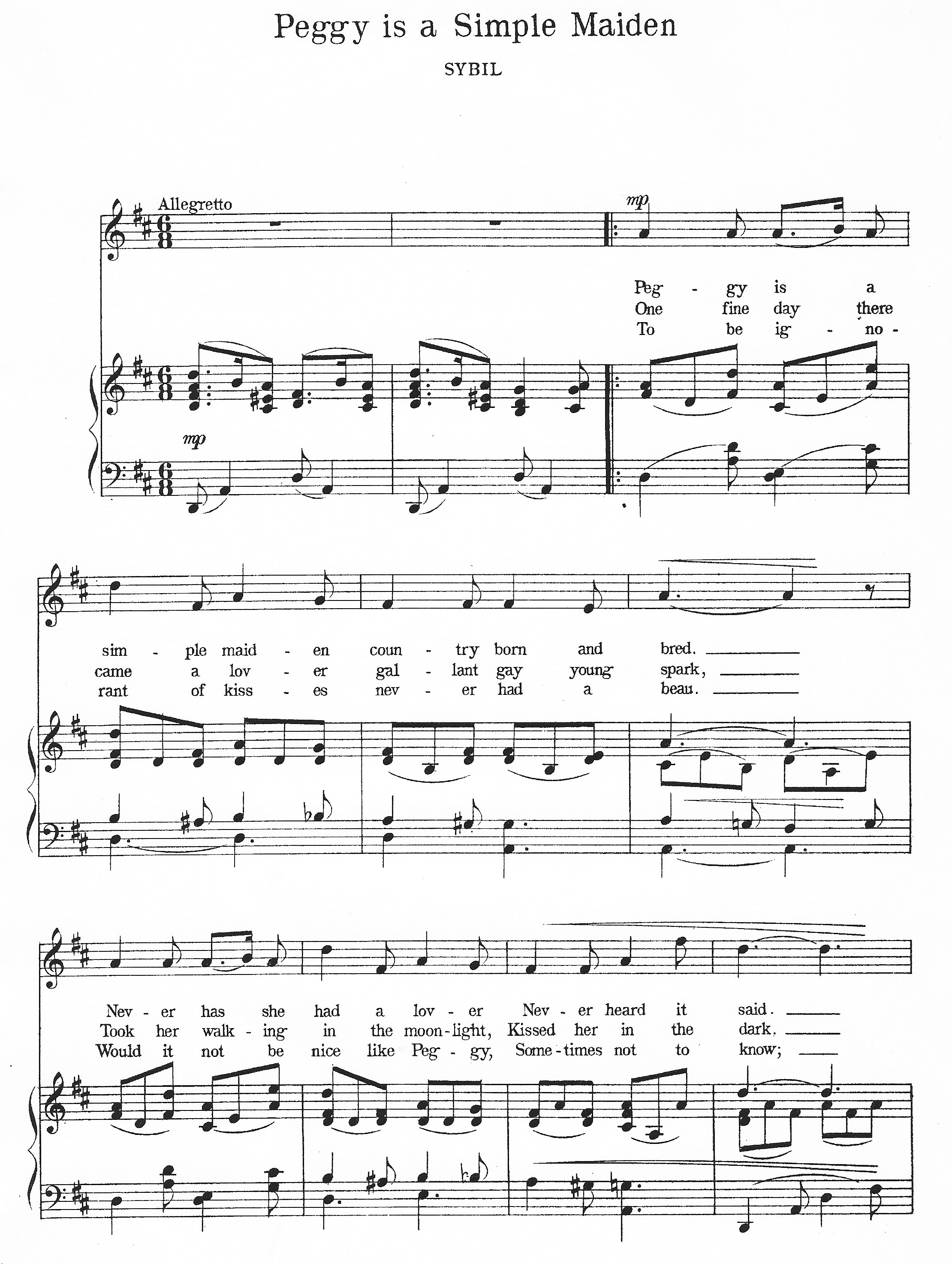 Below-Second page of the Second Act Minuet. This is the second instrumental work in the show; the first is the Postillion March. 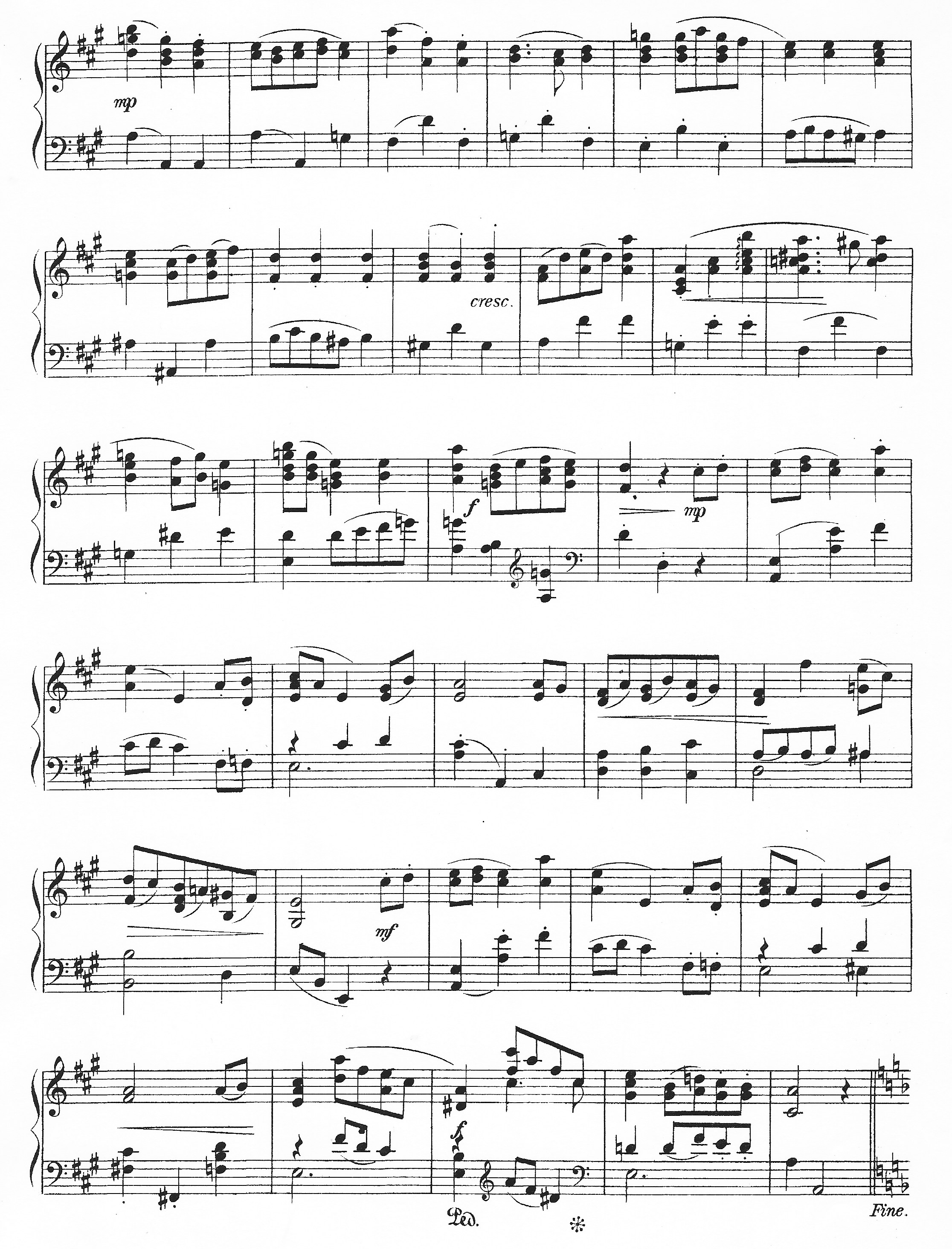 Thanks to Gail Wetherby from The Vincent Club for this material.

Rosamond had been part of previous Vincent Club shows.  In 1903 she was one of  21 “Priests of Vishnu” in The Rajah’s Daughter, an Operetta in Four Acts by Susan B. Howe and L. C. Lawrence. In 1904 she appeared as a  “Girl of the Haymakers’ Chorus” in The Tomboy, an Operetta in Two Acts by Constance Tippett and Susan B. Howe which use a cast of just under 100. In 1905 she was one of nine “Schoolgirls” managed by Miss Alice Gardiner in Alice In Wonderland, an Operetta in Two Acts. In 1907 the show took a different direction-a series of short skits and plays. For the first play, only 13 cast members were required, but one of those, “Susan Youngmuther,” was played by Miss Ethel Ranney, Malcolm’s future wife. The fourth item was a “Skit” for a solo artist, Miss Elizabeth S. Porter, with the verses and music written by Rosamond. The phrase “verses and Music” was handwritten in the program, but an article before the opening night said: “Miss Elizabeth Porter is again to lead the orchestra, which she does with an immense amount of dash and spirit, and also is to give an original monologue which cannot but be exceedingly funny.” (“Millet and Batt”-from Vincent Club Library) Miss Rosamond Dixey did the costumes for the show and danced, Miss Helen Apthorp did a solo dance, and “Miss Phillis Robbins, [who owned the farm near the Lang farm in New Boston] who has one of the most captivating voices in the company, is to sing several songs.” (Ibid) Johnston Collection. Complete work available.

Rosamond was married at King’s Chapel on Wednesday, May 3, 1911 at Noon in a very simple ceremony; there were no bridesmaids nor ushers. The engagement had been announced in early January. “Only members of the two families were at the church. Mr. Malcolm Lang gave his sister away. A number of Mr. Galacar’s relatives came from their home in Springfield, Mass.” (Herald (May 7, 1911): 22, GB) The Society Writer of the Herald wrote, Rosamond “wore the conventional white satin gown, trimmed with lace, a tulle veil fastened with orange blossoms and carried a bouquet of lilies of the valley. She wore a pearl brooch, the gift of the bridegroom. (Herald (May 4, 1911): 7, GB) “Mr. Galacar is the son of Mr. and Mrs. Charles E. Galacar of Springfield, a graduate of Yale, class of ’95, and a member of the Puritan, Eastern Yacht, St. Botolph and Yale clubs…The wedding march as the bride entered the church was played by John A. Loud of Beachmont and Mr. Lang, the bride’s brother, played the recessional music,” [Mendessohn’s Wedding March] (Herald, Op. cit., GB) The reception was at the Lang family home on Brimmer Street. “Among the guests were many Vincent Club girls, of which organization the bride is a member.” (Herald, Op. cit.) The couple had known each other a number of years. He signed his name in the Guest Book of the Lang farm on January 29, 1901, and also wrote a four stanza “Soliloquy” in German.

On September 2, 1913, Rosamond and her husband sailed from Liverpool back to Boston on the “Laconia” from their belated honeymoon in Europe-their home at this time was 74 Mount Vernon Street, Boston which had been done over during their absence. He was aged 40 and she was 34. ( S. S. Laconia Manifest) This trip may have been a way to deal with the death of their first child, Rosamond, on March 26, 1913. Just after they returned home Frederic was taken seriously ill with pneumonia which developed after a serious operation; there was little hope that he would survive. He did survive and was soon moved from Dr. Codman’s private hospital to his home on Mt. Vernon Street. (Springfield Union (October 12, 1913): 24, GB)

Frederic Ruthven Galacar, after his graduation from Yale in 1895, spent the next two years in Germany studying political economy. The Herald wrote that he graduated from the University of Goettingen. (Herald (January 3, 1911): 7, GB) After his return to the States in 1897 he began a career in insurance which was also his father’s career. On his father’s side, his “ancestors came from Scotland about 1780 and settled at Provincetown.”  Among Frederic’s club memberships were the Museum of Fine Arts, Harvard Musical Association-he became a member on October 7, 1904-aged c. 33, he as a shareholder in the Boston Opera House (as were B. J. Lang, Alice H. Burrage and Harry L Burrage), Unitarian Laymen’s League and King’s Chapel-Boston. “During the war [he] did considerable work for the Secret Service.” He also was the author of Historic Boston (1916). This was a 40 page “keepsake” for the delegates of the Springfield Fire and Marine Insurance Company of Springfield, Mass, Frederic’s company, who were attending the 21st. National Convention of Insurance Agents in Boston that year. It contained 21 black and white photos and brief descriptions and histories of historic places in Boston. Frederic died of heart disease after an illness of several weeks. He was survived by his wife and two sisters. (All information in this paragraph from his Yale obituary-available on line, except for Historic Boston details which came from the OCLC entry) As seen above, Frederic’s main occupation had been in insurance; he followed in his father’s footsteps. In 1899 Frederic was appointed special agent and adjuster for New England of the Union Fire Assurance Company of England. “Mr Galacar will in the future make Boston his headquarters.” (Springfield Republican (August 16, 1899): 8, GB) In December 1924 that he was made Vice-President and Director of the John Paulding Meade Company, one of the larger Boston insurance corporations. He was described as “one of the best-equipped insurance men of this city.” (Herald (December 1, 1924): 15, GB)

The Galacars lost their first two children, a girl, and a boy. The first child was Rosamond Lang (September 13, 1912-March 26, 1913: from a photo of a gravestone at Mt. Auburn Cemetery which is beside a stone for Frederic Galacar with only one date, June 27, 1915) Their second child was born and died on the same day. The Herald listed under “Died: Galacar-At Boston, June 27, 1915, infant son of Frederic R. and Rosamond Lang Galacar.” (Herald (June 29, 1915): 12, GB) Their third child, Charles, survived into adulthood.

In addition to her work as a Vincent Girl with their charitable works, Rosamond was also active in the Boston social scene. In February 1912 she was a Patron for a series of three lectures on Brahms. There were roughly 86 other Patrons among which were the Cabots, Mrs. John L. Gardner (Isabella Stuart Gardner), Mrs. Henry L. Higginson, and Mrs. Montgomery Sears.  (Herald (November 24, 1912): 27, GB) In 1915 Rosamond supported four performances of two French plays that had been translated by the poet Amy Lowell. These were presented at Jordan Hall and were to benefit the Women’s Municipal League. Families represented were the Abbotts, the Agassizes, the Saltonstalls, the Parkmans, the Jordans, Amy Lowell’s brother, the President of Harvard, Mr. A Lawrence Lowell, and many others. Also listed as attending were Mr. and Mrs. Malcolm Lang, Miss Margaret Lang, and Mrs. B. J. Lang. The dresses of some of the more prominent women were described: “Mrs. Lang’s was of black satin and chiffon over white, the girdle of old rose.” (Herald (February 7, 1915): 26, GB) In 1922 it had become “quite the fashionable thing to pour at one of the weekly teas of the Repertory Club which has sprung like magic into a membership of some 3,000.” (Herald (January 4, 1922): 15, GB) Rosamond was one of the four who presided at the tea table. After a talk on “The American Flag,” the members moved next door to the Copley Theatre for a performance of G. B. Shaw’s The Dark Lady of the Sonnet.

Rosamond was the first of B. J. Lang’s children to die, August 11, 1971, followed by Malcolm on March 7, 1972, and Margaret on May 30, 1972. As the oldest child, Margaret seemed to feel that it was her responsibility to look after her two younger siblings, just as she had cared for her own mother for so many years.

The four generations are:

Marguerite’s mother was Pamelia Paquette Houle: 1877-1952 (Mrs. Houle’s name was Madame Arsene P. Houle in the Engagement announcement). Marguerite’s Engagement (with photo) was announced in the Sunday Herald on March 17, 1940.

Charles David Galacar. He “was a health aide professional who specialized in helping elderly patients. In his youth, he departed Boston University to sail before the mast on the barkentine ‘Cutty Sark’ as well as other vessels in the Caribbean Sea and in Hawaii.” (Gloucester Daily Times, August 15, 2009-Ancestry.com) After Charles’s death, the family sold a tea set engraved with the name “B. J. Lang” on December 12, 2009 at Landry’s Auctions in Essex for $1,150. (E-mail August 12, 2010 from Robert E. Landry)

Information from an e-mail dated  September 28, 2009 from Christian Lang Galacar.

The “Daughters of the American Revolution Lineage Book Vol. 46” published in 1918, and available online through Google Books, has the following entry on pages 333 and 334:

Daughter of B. J. Lang and Frances Morse Burrage

Granddaughter of Johnson Carter Burrage and Emeline Brigham, his wife

Gr-granddaughter of George Brigham and Betsy Morse, his wife

Gr-gr-granddaughter of Daniel Brigham and Thankful Brigham, his wife